One of the main attractions of going to CMA fest, was having the chance to meet some of my favourite country music artists and see them perform in an intimate setting.

Granted, seeing the headliners perform in Nissan Stadium was pretty darn excellent too! (Can I get a minute of appreciation for Luke Bryan’s butt shaking’ y’all!) 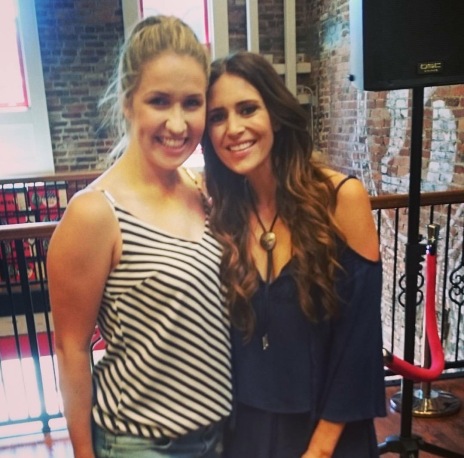 Anyway…a little over a year ago, I became aware of a country duo, Maddie & Tae.  The first song I heard of theirs was ‘Girl in a Country Song’ & the catchy melody and clever lyrics was what interested me in their music from day 1 and the pure hilarious video was appealing too! (LINK BELOW.)

So, when given the chance to meet Maddie & Tae at CMA Fest, I of course, jumped at it.  After waiting in line for 30 minutes and not getting to meet them, I waited in another line later on in the day and about 1.5 hours later, I finally met them.

They did an interview with Radio Disney earlier in the day and chatted to as many fans as possible. They were fun, fresh, polite & even when talking about their newest song ‘Sierra,’ which is about a girl Maddie knew from high school, (who, well let’s just say, wasn’t very nice!) they still seemed humble & genuine.  (LINK BELOW.)

Maddie & Tae are definitely an act I will follow and I look forward to more of their quirky songs & hilarious music videos.

The main artist who inspired me to come to Nashville is Kelleigh Bannen.  The girl behind the blog ‘This Nashville Life’ & songs such as ‘Famous,’ ‘Smoke When I drink’ & most recently ‘Cheap Sunglasses.’ (LINKS BELOW.) A real role model for me as she is also an alto..not many of us around in country!

I love her voice, dress sense,hard-working attitude & most importantly, her songwriting.

I went to see Kelleigh perform at Boot Barn on Broadway one morning at CMA Fest and it was everything I hoped it would be.  She sounded great, interacted with the small group of fans who came to watch her and also stayed at the end to do a meet and greet.  A gig I won’t forget in a hurry.

Her song ‘Famous’ was one of the main inspirations and encouragements for me when I was writing and releasing my debut EP ‘Charcoal Roses.’  Of course, I brought her a CD and she gave me one in return as well as a signed photo…that’ll be kept forever!

Finally, my most recent and perfect discovery of CMA Fest; Lauren Alaina.

I was encouraged to see Lauren perform at the Chevrolet Cruze Park stage by a friend & I had no idea what to expect from her.  Little did I know, I would be BLOWN AWAY by her voice, stage presence, confidence and all round bad-ass country girl attitude!  She sang a cover of ‘Little Big Town’s’ ‘Girl Crush’ that had the whole place belting out the words in no time.

Lauren was doing a meet & greet on the last day of CMA Fest, so I set off on Sunday morning to meet her.  She was meant to do a 1 hour meet & greet and I was told that as I was so far back in the line that I might not get to her…thankfully I stayed in line as she did an extra 45 minutes chatting to fans…total hero!

I told her that I thought we could be best friends and I gave her my CD as well which she seemed excited about..wonder if she likes it?! FANGIRL MOMENT!

So, although the majority of CMA Fest headliners were guys, my heroes of the week were these lovely ladies & I am leaving Nashville in a few days with 4 strong female role models! #girlpower